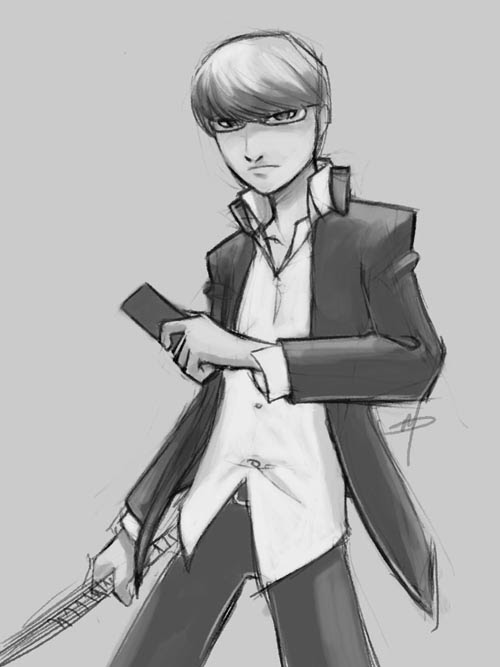 Atlus's Protagonist from Persona 4 in 30

I had my ipod on shuffle yesterday and the Persona 4 OST popped up. Thought I'd have bash at one of the characters this morning. To the best of my knowledge Protagonist is one of the few characters in RPG history to use a golf club for his main weapon for most of the game. I guess you use what you can get.

No cheesecake today...
-Dan
Posted by Daniel MacGregor at 10:05 AM No comments:

Email ThisBlogThis!Share to TwitterShare to FacebookShare to Pinterest
Labels: Persona 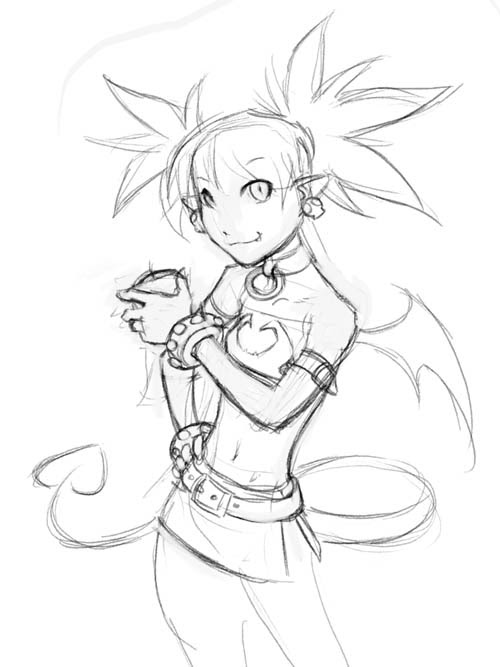 The first is a quick 15 of Etna from Disgaea. I really like this game but I haven't been able to finish it yet. Too much grinding.

I slept in again yesterday so I opened up photoshop during the day. I wasn't to happy with the last apple themed sketch I drew so I wanted to try again.

The second is this mornings 30. 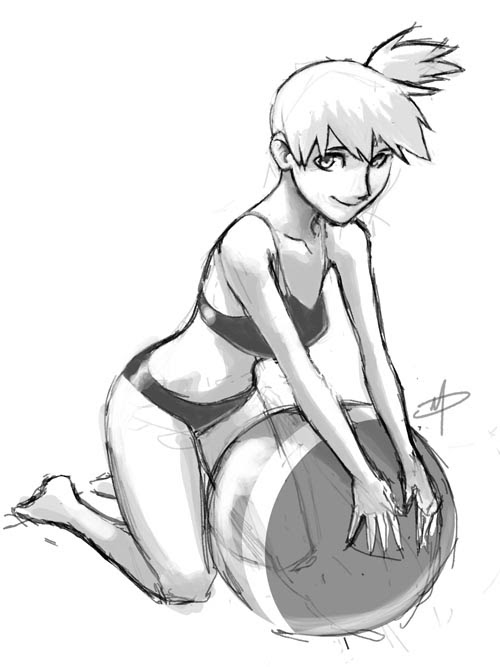 I guess It's supposed to be Pokemon Misty. It's so hot here now I just had to do something beach themed.

I loaded up photoshop this morning and for some reason the pressure sensitivity on my tablet just wasn't reading. I'm hoping it's just a glitch or something. I didn't want to stuff around with it so anyways it made this sketch alot harder than it should have been. I've gotten used to the pressure I guess. hopefully restarting my computer later will fix it.

enjoy
-Dan
Posted by Daniel MacGregor at 9:45 AM 2 comments: I noticed that I hadn't drawn anything Canadian while I've been here so I thought I give it a go. Cheesecake in thirty, while hard is not something I don't enjoy :). Who knows, there may be more like this on the way.

enjoy
-Dan
Posted by Daniel MacGregor at 8:21 AM 2 comments: 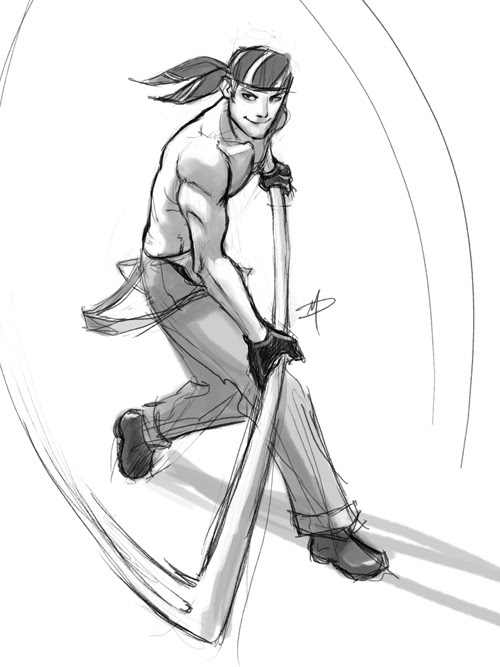 I don't know why but I woke up with the urge to do some pole fighting. King of fighters' Billy Kane popped up ready to go. I have to admit though he's probably not my favorite fighter to use as I'm not a big fan of brawlers with weapons. I got this one down in 15 for some reason so I played around with it for another 10.

enjoy
-Dan
Posted by Daniel MacGregor at 7:53 AM No comments:

Email ThisBlogThis!Share to TwitterShare to FacebookShare to Pinterest
Labels: King of Fighters

An apple a day 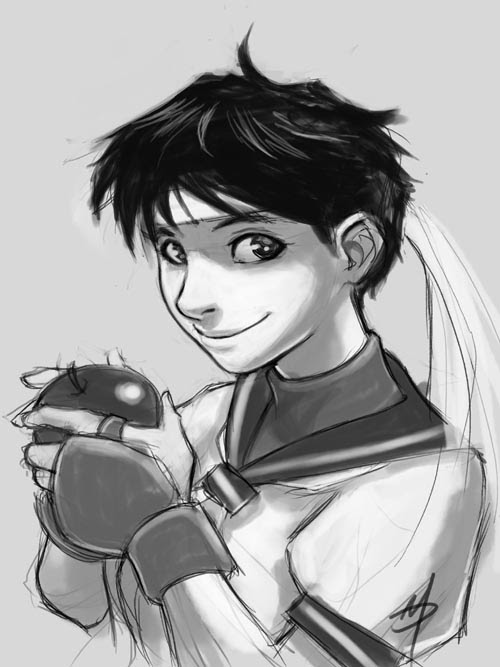 30 min of the cutest shotokan clone.

Sakura from Capcom's Street fighter series. Again I had a pose in my head but I didn't know who I was drawing until halfway through. A good reminder that I need to work on hair and clothing. Also using large areas of black.

Edit: July 26, 2009
This pic was bugging me this morning so I spent another 10 minutes reworking it

enjoy
-Dan
Posted by Daniel MacGregor at 7:59 AM No comments: 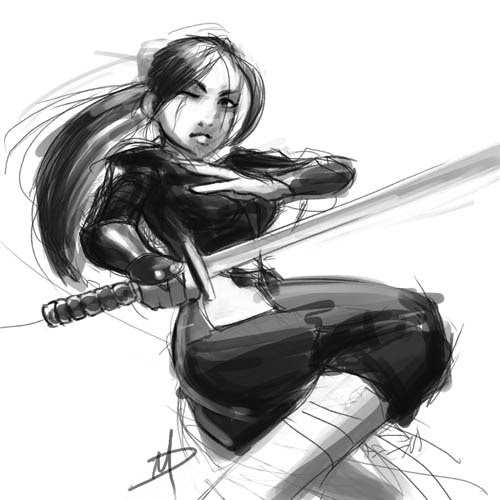 I really didn't know what I was drawing I just had an idea of the pose in my head. It kind of looked like this. I'm thinking it would have been good to work with white on black for this one. Well there's always tomorrow. 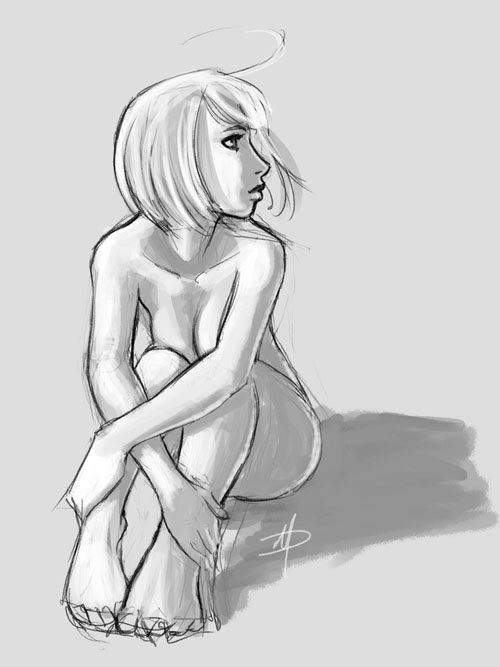 Well another Ai chan in 30

I wanted to do something beach themed but a little different for me. So I avoided the usual "bouncy" or heroic pose and went for something more restrained. Half way though during some keyboard shortcuts I stumbled across a nice brush then couldn't find it when I changed brushes for a second. I'll find it again.

The funny thing is I ran out of time for the beach and her costume so now she's stuck with a birthday suit. Oh the tragedy. :)

enjoy
-Dan
Posted by Daniel MacGregor at 8:02 AM No comments:

Goin' for a ride It's one of those mornings were I wasn't sure what I was drawing. I'll have to dig around for her costume ref. I know where it is but I'd already started drawing when I thought about drawing her. Going for the short hair again. I think it suits her more. The old hairstyle was very anime inspired.

I'm not too sure about the pose. I'll need to reference if I attempt this again.

enjoy
-Dan
Posted by Daniel MacGregor at 8:21 AM 1 comment: I played around with this idea a while ago. I did 2 others but was probably distracted by a shiny new game or something, so never got around to doing Ash.

Although the idea was to depict a life after Pokemon, Ash just seemed to be one of those characters who would spend his whole life collecting them all. The wondering trainer always training, always battling, always seeking the answer to the eternal question,

Probably finds himself as the antagonist for Pokemon crimson or something

enjoy
-Dan
Posted by Daniel MacGregor at 8:48 AM No comments:

Email ThisBlogThis!Share to TwitterShare to FacebookShare to Pinterest
Labels: Pokemon 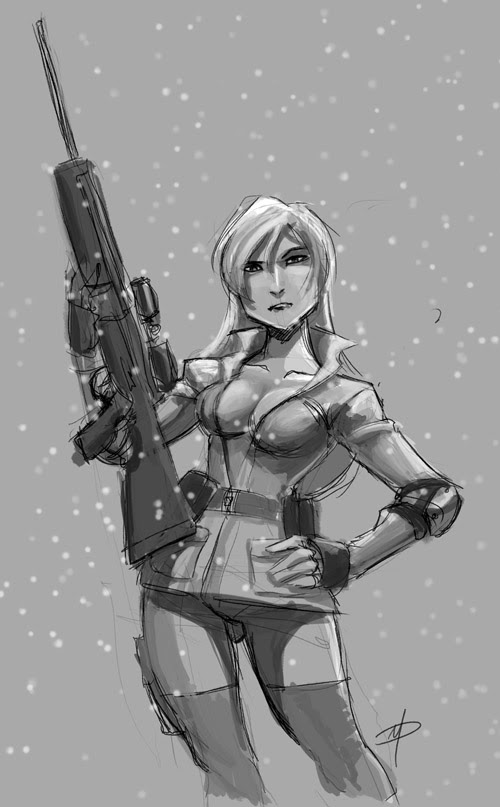 Part of me wants to do the gun properly, maybe later.

Boss fights are usually a big part of game I like . Sniper wolf's fight was my first experience with just that. A sniping battle. For a fight with so little blasting away this fight was so intense. The only thing that topped this type of fight was the fight with the End in MGS3. I'm hoping that they bring her back for the next MGS. :)

enjoy
-Dan
Posted by Daniel MacGregor at 7:42 AM No comments:

A 15 min sketch of the Sassy Cate Archer from The Operative: No One Lives Forever. I had no time this morning and I was thinking that some of my frustration with this exercise was I was trying to hard and over working the pieces. So I kept this loose and took the advice of trying some other brushes. (I like this one.)

NOLF is probably my all time favorite FPS. There's so much done right in this game that makes it so awesome, From the characters to the writing (in an FPS?!) to the smooth soundtrack, though if you've played it you already know all that.

Email ThisBlogThis!Share to TwitterShare to FacebookShare to Pinterest
Labels: No One Lives Forever 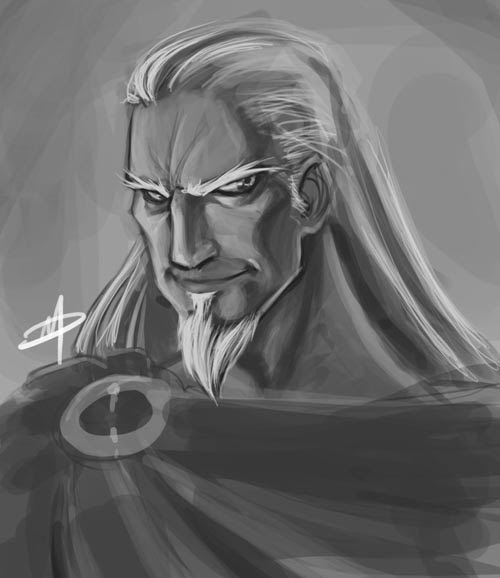 This whole drawing in the morning things is harder than I thought it was going to be.

On paper I know this would have worked out fine but i don't know about photoshop yet. Maybe if I define it more at the beginning. Maybe sketchbookpro.

Lol, What?! Half a dozen drawings in and I'm looking at other options. I know, things will get better though. 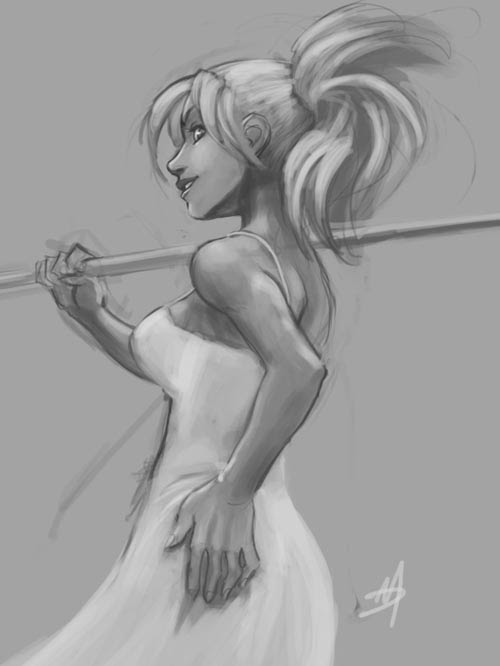 Anyways no plan or idea with this one. Though I realized a few things as result. I work better when I know what I'm drawing. I need to work on hair rendering and clothing. and finally I should remember to use layers when adding something to see if it's fits (there are only so many undos available in photoshop (unlike life where there are none!)).

anyways enjoy
-Dan
Posted by Daniel MacGregor at 9:01 AM No comments: 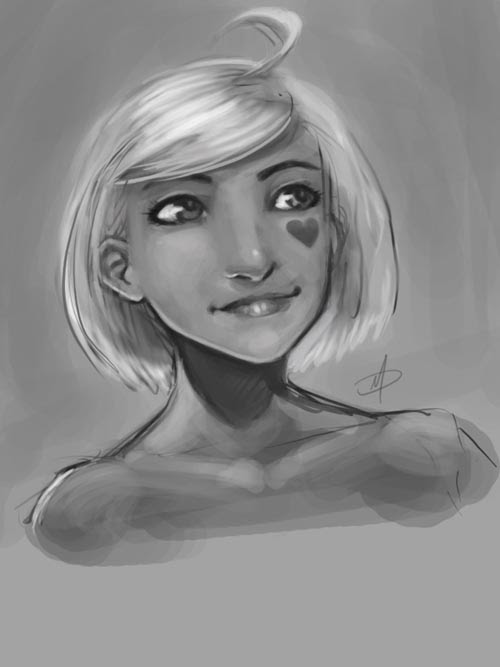 This mornings 30 is actually a character of mine.

I was playing around a while ago with giving Ai chan a haircut. I was in one of my more real states wondering how she keeps all her hair under her helmet. I kinda like it.

enjoy
-Dan
Posted by Daniel MacGregor at 8:23 AM 1 comment:

Well I don't have the time I did just a few weeks ago but that doesn't mean I have to stop drawing. I've been getting into photoshop and sketching for half an hour. I usually draw on paper first but I want to see how this goes. With that out of the way here's this morning. 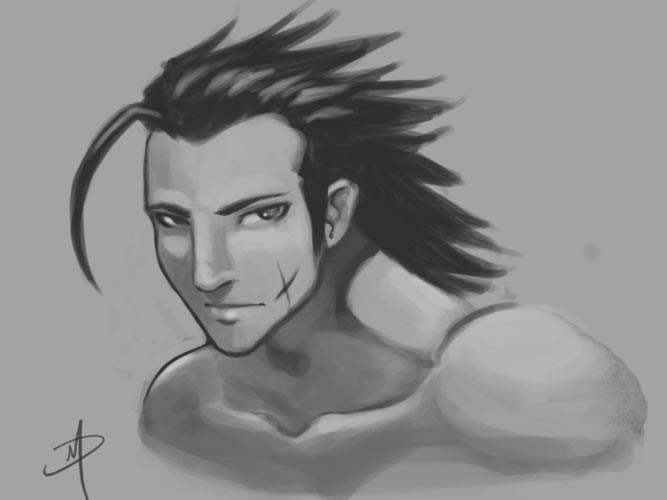 enjoy
-Dan
Posted by Daniel MacGregor at 9:51 AM No comments:

There I was just drawing away when that life thing pops up.

I like being busy but It always takes up a lot of time in the beginning from doing my own stuff. Last time this happened I stopped drawing for about 2 years, but not this time! I am still drawing. looks like crap but I'm still drawing. I haven't got the speed down yet but I can see it happening. I've still got some pics I will get around to colouring and some other stuff too.

I the mean time I will post some rough stuff. Its usually easier to draw for something.

anyways
Later
-Dan
Posted by Daniel MacGregor at 10:30 AM 2 comments:

Once upon a time RPG's were played with pencil and paper and twenty sided die.

I still remember getting together with friends on a weekends to raid dungeons and kill dragons. That was until one of us found god and burnt all our books for they were the devils work. (I kid not). Probably a blessing I guess who knows.

Anyways I found some old sketches the other day of some characters who I thought could do with some revisiting. I'm probably have a go at colouring one of these but we shall see. 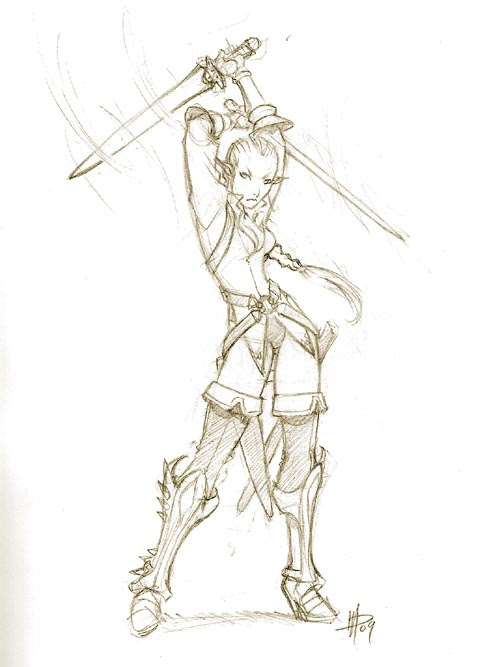 (Bear with me as I geek out a little here.) Half elves if I remember are ambidextrous. This one managed to find both a Flame Tongue and a Frost Brand. In the original sketch she had a little wyrmling familiar, I can't remember how that came about though. 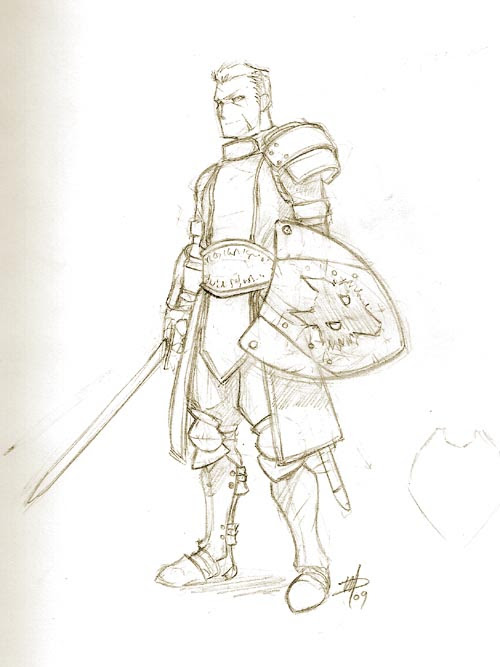 Just your basic fighter here (probably the result of bad stats) with a belt of giant strength and your run of the mill Vorpal Sword! (*dice rolls* "20!" *collect treasure and XP*)

Later in our D&D years we started making our own classes like Chaos warriors (Anti-Paladins), monsters and weapons. 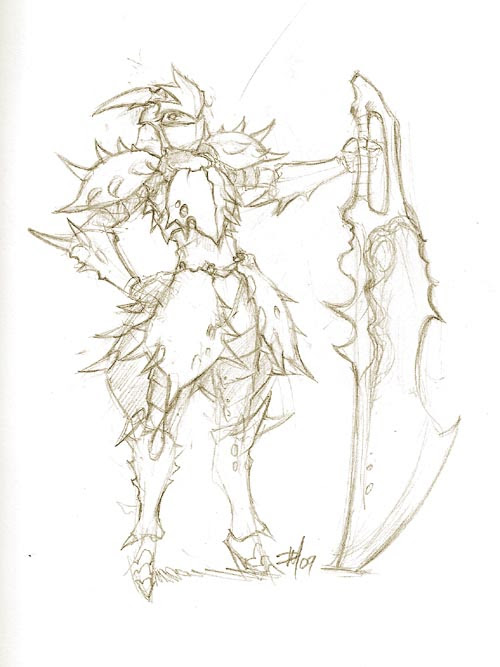 This lass was created by a friend of mine. A little more experimental than most of what we came up with. A knight of nature. All armor and weapons are grown from a plant base and have the ability to regenerate (if given time). My original sketch looked like something from Bubblegum crisis. That's how they described the armor at the time. The sword was origionally that big and the thorns on the armor could be removed and used as stilleto knives. I've recently been playing Monster Hunter again and I let that influence the design this time. I was thinking the plates are some sort of seed husks or something...
Posted by Daniel MacGregor at 4:33 PM 2 comments:

Other stuff about me